The myth of Hades and Persephone is one of the well known Greek myths.

Hades was the brother of Zeus and the god of the underworld.

Persephone was the daughter of Demeter, the Goddess of nature.

The myth of Hades and Persephone is one more myth of love and abduction in the Greek mythology.

Hades and Persephone: the beginning of the myth

Hades fell in love with Persephone and decided to kidnap her. The myth says that in one of the rare times he left the Underworld, he traveled above ground to pursue her, while she was gathering flowers in a field.

One day Hades, God of the Underworld, saw Persephone and instantly fell in love with her.

Adis (Hades) confided his secret in his brother Zeus, asking for help, so the two of them concocted a plan to trap her. As the girl (Persephone) played with her companions, they caused the ground to split underneath her.

Persephone slipped beneath the Earth and Hades stole her to the Underworld where he made her his wife.

The myth says that Persephone was very unhappy, but after much time, she came to love the cold-blooded Hades and lived happily with him.

A different version of the myth of Hades and Persephone

The myth of Hades and Persephone also has a different version; in this one Demeter was present when Persephone was kidnapped by God Hades but was tricked by Zeus and Hades.

That morning when Demeter descended on Earth with her daughter Persephone , she left her to play with the sea nymphs called Nereids and the Naiads who were the freshwater nymphs of the lakes, springs and rivers.

Demeter went to supervise her bountiful crops. As Persephone engaged in play and with the rest of the group, her attention fell upon the potently fragrant valley nearby and she couldn’t take her eyes of the yellow flower narcissus. She called upon her playmates to accompany her, but they couldn’t possibly go with her as leaving the side of their water bodies would result in their death.

The flower Narcissus was planted there by Gaia, who was following the orders of Zeus. The goal was to enchant Persephone and attract her, away from her guides.

Persephone danced her way to the garden alone and tried to pluck the narcissus from the bosom of Gaia. It drained her energies as the narcissus only came out after a lot of pulling. But suddenly, to her utter fright, she saw the tiny hole from which she had drawn out the flower shaft, began to rapid grow in size until it started to resemble a mighty enormous chasm. From this came the vigorous galloping sounds of multiple horses and such sudden happenings only froze the frail beauty to her feet. 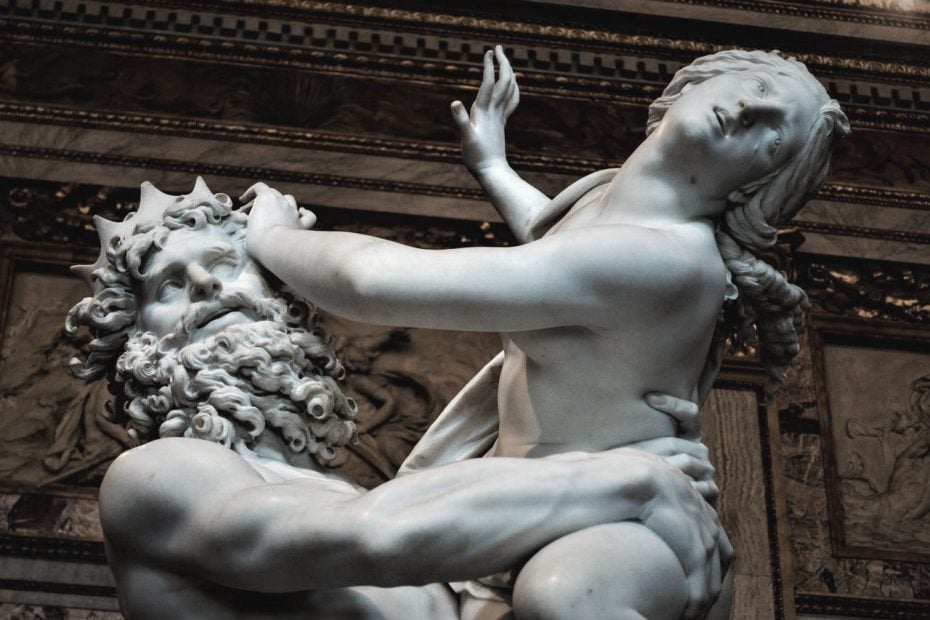 Out of all her friends only the naiad Cyane tried to rescue the crying Persephone but she was no match for the powerful Hades. Bereaving her friend’s kidnap, Cyane melted into a pool of tears and formed the river Cyane at the spot.

Demeter rushed back to where she had left her daughter and found only the Cyane river there with the other nymphs weeping. Worried as she was, she asked all as to the whereabouts of her beloved daughter.

Nobody could tell her anything at all and furious that they couldn’t protect her child, she cursed all the nymphs into becoming heinous women with plumed bodies and scaly feet, called the sirens. It was only the river Cyane who helped her by washing over the belt of Persephone, indicating that something gravely wrong had happened.

Demeter went mad and hunted for her daughter everywhere. The myth says that she even disguised herself  as an aged lady and with lighted torched in her hands roamed the Earth for nine long days and nine long nights.

Finally, she met Hekate, the deity of magic, witchcraft, spirits and crossroads, at the dawn of the 10th day who had pity at her dismal condition and asked her to seek help from the all seeing Helios, the sun god. Helios told Demeter all about how Hades had dragged Persephone into the underworld.

Persephone in the Underworld

Before leaving the underworld, Persephone had been persuaded to eat four seeds of a pomegranate. In ancient mythology, to eat the fruit of one’s captor meant that one would have to return to that captor or country, so Persephone was doomed to return to the underworld for four months of the year. But she was allowed to spend the remaining two-thirds of the year with her Earth Mother, Demeter.

The myth of Hades and Persephone is associated with the coming of Spring and Winter: When Persephone comes to the Earth, it’s springtime. When she descends to Hades, it is winter.

Celebrating the myth of Persephone

The disappearance and the return of Persephone were the occasions of great festivals in ancient Greece, among them the Elefsinian rites, whose secrets were so closely guarded that little is known about them today.

Some experts believe the rites or mysteries fostered the idea of a more perfect life after death, and thus helped to lay the groundwork for the coming of Christianity, which upholds the idea of everlasting life.

36 thoughts on “The Myth of Hades and Persephone”