Greek Mythology; an eerie and unearthly world of Gods, deities, heroes, weak men and women fighting for the overall good, monsters, creatures from an unknown world.

Greek Mythology is the body of all the legends, stories and myths created by the ancient Greeks, and it used to be the basis of their spiritual and religious believes, and cult practices.

Greek Mythology is embodied in a vast array of narratives, stories and Arts, ranging from pottery and vase painting to Dramas, such as tragedies and comedies.

Greeks were polytheistic people, meaning that they believed in the existence of Gods, the famous 12 Gods of Mount Olympus and numerous deities and semi gods that played supporting roles to the original Gods. 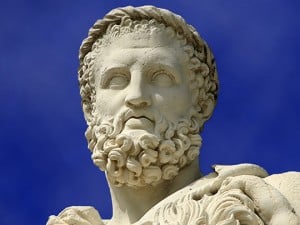 Ancient Greeks believed that their Gods had enormous powers, and that they were able to control nature in all its forms. The interesting part is that it was Greeks themselves who appointed all this power to their Gods, yet, they were full of respect and fear for them.

Gods were worshiped in temples erected for them, and there was always a person, a priestess mostly, that could communicate with the God and interpret his will.

The most known example is Pythia in Delphi, at the Sanctuary of God Apollo. Although Apollo was a mythological God, Greeks were intimidated by his oracles and prophecies; they were also extremely grateful that their God was communicating with them to help them.

The interesting part of Greek Mythology is that heroes, Gods and monsters, every creature taking part in myths had some sort of anthropological characteristics.

Greeks use the word “anthropomorfismos” to explain the human characteristics of their Gods and heroes, characteristics that were the main source for the creation and birth of myths.

The origin of Greek Mythology

The oldest sources of Greek Mythology are the two epic poems written by Homer: the Odyssey and the Iliad, although the origins of the world and the vast effort to explain the nature, the surroundings and the very essence of Greek mythology itself, lies at the texts of Hesiod, especially Theogony:

“At the beginning, there was chaos” he said, explaining the Genesis of the world, the birth of Gods, the succession of rulers, the origins of human woes. Till today, Theogony is considered the basis of the Greek mythology, probably the most comprehensive literal creation of that time.

Later, hymns, poems, tragedies, plays, arts, artists, everyone tried to explain and reproduce the myths about the Gods, about heroes such as Hercules and Thiseas, about important kings, such as Minos, about the wars of the gods, the wars of the people.

Greek Mythology is vast and fascinating

The extensive influence of Greek Mythology on the world’s culture and historic heritage is undeniable, since, till today, philosophers, artists and scholars are trying to explain the world and its ethics based on parts of the Greek mythology.

The secret of the Greeks and the Greek mythology, though, is that myths and history are so artistically intertwined and interwoven that no one really knows where fiction ends and where history begins. Or maybe is it vice versa?