Centaurs were half-men and half-horses and lived in a region called Pelion in Magnesia, a coastal region in Central Greece.

The Centaurs in Greek Mythology were  a particular tribe that stood out from anything else known in history. The Centaurs were a usual theme in the arts, and were usually depicted  to have the  head torso and arms of a man, and the rest of their body belonged to the horse species.

The Centaurs were so popular because they were totally unpredictable and wild. There were the good and the bad ones; some of them would often be drunk and violent, eating raw flesh and drinking too much wine. They were usually followers of God Dionysus, who always wanted drunk and festive followers and servants. Since they were savages, they used to live far away from people, creating their own colonies.

In Greek mythology, the Centaurs had one father known with the name Ixion, who was one of Ares’ sons. Ixion killed the father of his wife, but Zeus took pity of him and forgave his acts after some time. However, in order to do so, Zeus tried to test him. He created a replica of Hera and sent it to Ixion. Ixion was tricked and he tried to seduce the woman. The result of their mating was the monstrous children that we call Centaurs.

There is another version of the myth about the origins of the Centaurs. According to this version, their father was Centaurus, who was not very well reputed among men and Gods. He was believed to be the son of God Apollo. 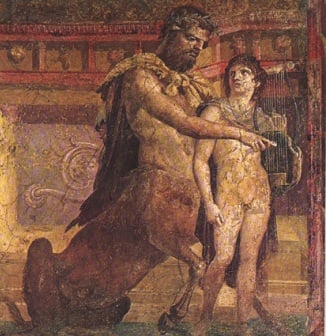 There were many Greek writers and historians who mentioned the Centaurs in their myths. The most known one was Pindar, who described this tribe in details, giving us information about the origins of the centaurs. Other authors and poets such as Homer referred to similar monsters and creatures, but they never used the term Centaur to name them.

Centaurs had a really bad reputation in Greek myths and mythology. They were mostly famous because they were extremely violent towards women and other people.

There are numerous myths and stories about centaurs violating women in Greek mythology. One of these stories refers to centaur Nesus who tried to rape Heracles’ wife, Deianeira. However, this woman not only managed to defend herself, but she also killed the centaur.

In his last moments, Nessus tried to excuse himself and gave the women a love drug that she used to seduce her husband. However, Nessus had played her, since the love drug was a poison and Heracles suffered so much that he decided to throw himself into the flames and die, rather than suffer this agony.

The Good Centaurs, Cheiron and Pholos 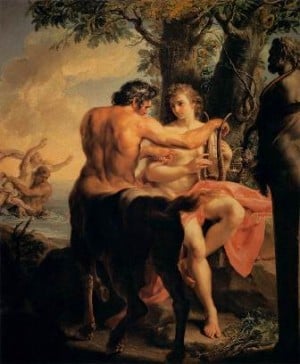 It would be a mistake to think that all centaurs were bad. There were 2 different, good centaurs that were actually pretty famous in Greek mythology and history.

The first one was Cheiron, a centaur – scholar who aimed at finding harmony in nature, so he learned many things about medicine, arts, philosophy and liberal arts. He also learned about disciplines and sciences that were usually irrelevant with the centaurs.

Cheiron was mostly known as the tutor of God Apollo, and as an advisor to many people and deities such as Peleus – whom he advised to marry Goddess Thetis. Although the Goddess was resisting the wedding at first, she decided to marry Peleus and gave birth to the hero Achilles.

The second known good centaur was Pholos, who was a friend of Heracles. Pholos allowed Heracles to stay with him and gave him a feast. Heracles asked for wine and Pholos opened the jar with the best wine to give to him, but the other centaurs smelled it and attacked the cave where the two men were celebrating. The battle was ferocious and many centaurs and men were injured.

One of them was Cheiron who was so badly wounded that he wished to die, although immortal. Prometheus heard the cries of Cheiron and offered him to die and give him his immortality. Indeed, the centaur died leaving Prometheus being eternally alive.

The Centaurs in Modern Arts

In modern times, the centaurs have appeared again in arts and literature, especially in the genre of fantasy. There are some sci-fi and magical stories like the ones of Harry Potter and The Narnian Chronicles, as well as the Piers Anthony’s Xanth series that have major characters who are actually centaurs.