Hypnos is the Greek god of Sleep.

In many artistic works inspired by the Greek Mythology,  Hypnos was represented as a gentle young man, usually with wings attached to his temples or shoulders.

In Hesiod’s portray, Hypnos and his brother Thanatos, the god of Death, were both terrible gods and pretty much inseparable in their acts

Intangible as the sleep is, Hypnos himself could have been both, but in any case he had enormous power over mortals and immortals – including the God of the Gods, Zeus.

Hypnos was also the father of another powerful deity – Morpheus, deity of Dreams. 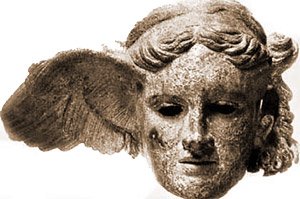 The Family Tree of  Hypnos

Father: Erebus, the deity of Darkness

Mother: Nyx, the deity of the Night.

Wife: Pasithea, the deity of hallucinations

Hypnos was the son of goddess Nyx (meaning “night”) and Erebus (deep darkness, or shadow). In Hesiod’s version though, Hypnos had no father.

Hypnos lived in the dark cave, in the Hades (Underworld), whose entrance was full of poppies and other hypnotic plants. One version suggests that Hypnos lived in the cave under one Greek island, Lemnos, and that through his cave the river of forgetfulness, Lethe, used to flow.

Hypnos was married to the youngest of the Graces – Pasithea (or Pasithee), a deity of hallucination or relaxation, depending on the interpretation. Their marriage was a direct result of Hypnos’s blackmail to Hera – in order to do her a very tricky favor regarding the Trojan War, Hypnos asked for Pasithea and Hera had no choice so she offered her to Hypnos.

There were rumors (well, they exist even in mythology!) that Hypnos and Pasithea had even a thousand children, but the most common belief is that they had four sons. Their sons – Oneiroi (meaning “dreams” in Greek) were: Morpheus, Ikelos, Phobetor, and Phantasos.

Oneiroi, the dream-bearing sons of Hypnos

The myth says that Oneiroi lived at the shores of the Ocean in the West, in the cave close to Hades. The cave had two gates – one made of the buckhorn the other of the ivory – so that they could choose what dreams to send. The latter was believed to be the gate for the false dreams. But before they were able to act, their father Hypnos had to do the work, putting people to sleep.

It seems that this family, including Hypnos’s brother Thanatos, really owned both the most dangerous and most desired abilities in Greek Mythology: sleep, dreams, fear and death.

Tales and myths about Hypnos

There are many tales related to Hypnos. One of the most known was related to Zeus, the mighty God, who had the influence over everything and anything. But Hypnos turned out to overpower him, and not only once. And both times Hera was involved.

The first time, Hera was so angry with Hercules and wanted to torture him, but Zeus was not supposed to see it. So, she asked Hypnos to do his deeds and he did. When Zeus woke up, he was so enraged and went on to look for Hypnos. But when he found him in the arms of his mother, Zeus gave up the revenge and only warned Hypnos not to try something similar again. But the temptation stroke again.

Hypnos’ role in the Trojan War

During the Trojan War, Hera had her own ideas again. She wanted to help the Achaeans who were losing the war at one point, and for that she needed Zeus to be distracted. Thus, she asked Hypnos for the same favor again: to put Zeus to sleep so she could proceed with her plans.

Hypnos was very reluctant to mess again with the father of the gods, and Hera tried to offer him various appealing gifts that he refused. Finally, they agreed: Hypnos would get Pasithea as his bride.

So, Hera transformed Hypnos into a bird. He hid on Mount Ida in Crete until Zeus was completely seduced by Hera, and then Hypnos put him to sleep.

Hypnos – bird flew to Poseidon to ask him to help the Achaeans since Zeus was asleep. Poseidon did help the Greeks, and the war changed its course.

12 thoughts on “Hypnos, the god of Sleep”