Morpheus was the God of Dreams, the one with the amazing ability of appearing in dreams of mortals in any form. As his name implies – the Greek word “morphe” means “form” – he was the one who shaped and formed the dreams.

In The Arms of Morpheus

Morpheus was the God responsible for the dreams of people. When in the arms of Morpheus, people would enjoy a sound sleep, but would also see dream about their future or even coming events. Morpheus was the dream messenger of Gods, communicating the divine messages through images and stories, created as dreams.

Being the master of dreams, Morpheus had the ability to send images to the visions of people, to shape these images and give a form to the creatures that lived in dreams. Morpheus himself had a talent in mimicking any human in the dreams, and was able to take any form he wanted.

Ovid the Poet wrote in his Metamorphosis:

“King Sleep was father of a thousand sons – indeed a tribe – and of them all, the one he chose was Morpheus, who had such skill in miming any human form at will. No other Dream (Oneiro, Morpheus’ brother)  can match his artistry in counterfeiting men: their voice, their gait, their face – their moods; and, too, he imitates their dress precisely and the words they use most frequently. But he mimes only men…”

When in his real form Morpheus had wings on his back. It was believed that he and his brothers were given wings by their uncle Thanatos, the deity of death, although some interpretations said that they were wing-born.

The legend says that Morpheus used his wings not only to reach those who needed help in their dreams but also to carry his father, the wingless Hypnos, to the dream world in the caves, when in several occasions needed to be saved from Zeus’ menace.

This version also suggests that Hypnos was a pretty lazy deity, spending most of his time sleeping.

Father: Hypnos, God of Sleep. Descendant of Erebus and Nyx

Mother: Pasithea –  Goddess of relaxation and rest. Descendant of Hera and Dionyssus.

Morpheus was very protective of his whole family. He had the perfect family for his deeds:  His father, Hypnos  was the personification of Sleep, seen both as god and devil. His mother Pasithea, was the deity of Hallucinations, his grandmother Nyx, the deity of Night,. And his uncle was the fearsome Thanatos, bringing death to people.

Morpheus and his brothers were called Oneiroi (Dreams) . They were his ultimate assistants: Icelus was responsible for the reality parts of the dreams, Phobetor was the creator of phobic or fearful dreams, while Phantasus created the unreal dreams, full of phantasms. What made Morpheus the biggest among his brothers was his ability to oversee the dreams of heroes and kings and influence the dreams of Gods.

The Dream World of Morpheus 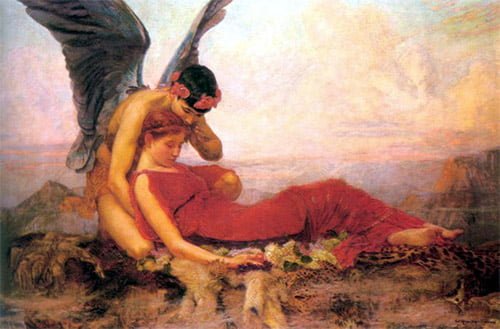 The Dream World of Morpheus was the place where his family lived. While shaping dreams of mortals as he wished, and visited countless bedrooms, Morpheus slept in a cave full of poppy seeds. That mythical fact is maybe why morphine (known as morphium as well) – opium based medication for severe pain – borrowed its name from Morpheus.

The River of Forgetfulness and the River of Oblivion were found in that world, highly protected by the gates under the supervision of two monsters that would easily materialize the fears of any uninvited visitors. The legend says that only the gods from Olympus were allowed in this family nest.

It seems that Morpheus was one of the busiest deities so he didn’t have a wife, or at least so it was known in the Greek mythology. But some interpretations were ready to see him with Iris, the personification of the rainbow and messenger of the gods.

16 thoughts on “Morpheus – The God of Dreams”