Helios is the Greek Sun god, whom the Romans called Sol. Most often, people viewed or portrayed Helios as a mighty charioteer, driving his flaming chariot (or gleaming horses) from east to west across the sky each day.

At night, according to the legend, Helios crossed back to the east by floating in a golden cup on the stream of Ocean, the mythical river thought to encircle the flat earth.

Because Helios was in the sky all day looking down on the earth, people assumed he saw and heard everything that went on in that domain; thus, both gods and humans called on him as a witness to various events or oaths sworn.

Helios was usually depicted as a beardless and very handsome man in purplish robes, crowned with a golden aureole, which accented his role as the Sun God. The characteristic chariot was drawn by four winged horses.

Who was the god of the Sun? Helios or Apollo 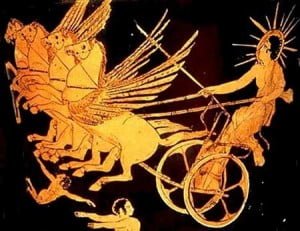 There is a confusion in Greek Mythology regarding the identity of the god of the Sun. There are historians and followers of the Greek mythology that denote the role of god Apollo, as God of the Sun, although it is evident that Greeks believed in a separate Sun God.

Helios is mentioned in numerous philosophic texts and poetic or fictional texts; for instance, Homer is the one who refers to Helios as the Sun God, claiming that he was the God who could hear and understand everything that was happening on Earth.

There are many Greek myths about Helios, the Sun God. For example, the goddess Demeter consulted him after her daughter, Persephone, disappeared; Helios told her that Hades, ruler of the Underworld, had abducted the girl.

The most famous myth in which Helios takes part is that of his mortal son, Phaethon. The boy demanded that his father Helios allow him to drive his gleaming chariot across the sky for a day. However, Phaethon was unable to control his father’s horses, and the chariot ran wild through the heavens until Zeus intervened and struck the young man dead. 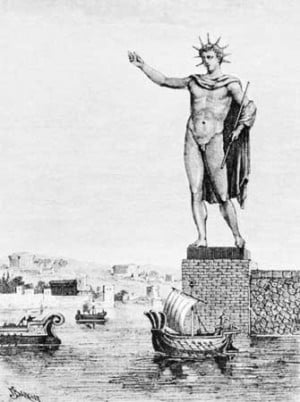 In another story, one day Zeus made each of the gods the patron deity of one or another earthly land or city—all except for Helios, that is, who at the time was fulfilling his daily duty of driving his chariot across the sky.

To compensate for the oversight, Zeus gave Helios dominion over the newly created island of Rhodes. Rhodes is a Greek island located off the southwestern coast of Asia Minor, in the complex of the Dodecanese islands.

There, the sun god’s three grandsons — Camirus, Lindus, and Ialyssus—ruled and gave their names to the three largest cities.

This myth was the basis of the Rhodians’ worship of Helios as their national god. Still, Rhodes is called the Island of Sun.

They honored him as the subject of the huge bronze statue they erected circa 280 B.C. at the entrance to their main harbor. Called the Colossus of Rhodes, it later made the prestigious list of the seven wonders of the ancient world.

It is said that the huge statue Colossus broke and collapsed after a massive earthquake that hit the island of Rhodes in the ancient years.

Heliopolis, the city of God Helios

Helios was worshiped in many cities, states and countries. In Ancient Egypt, there was a city, Heliopolis, built in honor of the Sun God. Heliopolis was the seat of worship of God Helios, therefore its name means the Sun City in Greek.

5 thoughts on “Helios the Sun God”