The myth of Daedalus and Icarus is one of the most known and fascinating Greek Myths, as it consists of both historical and mythical details.

While in Crete Daedalus created the plan for the Minoan Palace of Knossos, one of the most important archaeological sites in Crete and Greece today. It was a magnificent architectural design and building, of 1,300 rooms, decorated with stunning frescoes and artifacts, saved until today. The sculpture of Ariadne in Knossos and many others in Elounda and Karia are also his.

King Minos and Daedalus had great understanding at first, but their relationships started deteriorating at some point; there are several versions explaining this sudden change, although the most common one is that Daedalus was the one who advised Princess Ariadne to give Theseus the thread that helped him come out from the infamous Labyrinth, after killing the Minotaur.

The Labyrinth was a maze built by Daedalus; King Minos wanted a building suitable to imprison the mythical monster Minotaur, and according to the myth, he used to imprison his enemies in the labyrinth, making sure that they would be killed by the monster.

Minos was infuriated when found out about the betrayal and imprisoned Daedalus and his son Icarus in the Labyrinth.

The flight of Daedalus and Icarus 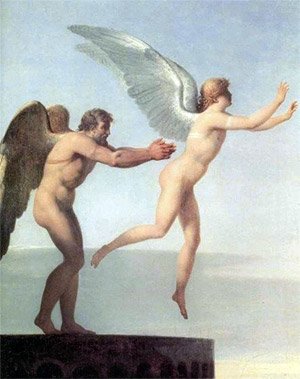 Icarus was the young son of Daedalus and Nafsicrate, one of King Minos’ servants. Daedalus was way too smart and inventive, thus, he started thinking how he and Icarus would escape the Labyrinth. Knowing that his architectural creation was too complicated, he figured out that they could not come out on foot. He also knew that the shores of Crete were perfectly guarded, thus, they would not be able to escape by sea either. The only way left was the air.

Daedalus managed to create gigantic wings, using branches of osier and connected them with wax. He taught Icarus how to fly, but told him to keep away from the sun because the heat would make the wax melt, destroying the wings.

Although he was warned, Icarus was too young and too enthusiastic about flying. He got excited by the thrill of flying and carried away by the amazing feeling of freedom and started flying high to salute the sun, diving low to the sea, and then up high again.

His father Daedalus was trying in vain to make young Icarus to understand that his behavior was dangerous, and Icarus soon saw his wings melting.

Icarus fell into the sea and drowned. The Icarian Sea, where he fell, was named after him and there is also a nearby small island called Icaria.

9 thoughts on “The myth of Daedalus and Icarus”