The myth of Orpheus and Eurydice is one of the most famous and beloved Greek myths. A myth about love and passion, and also about the weaknesses of the human spirit.

Orpheus was the son of Apollo and Calliope, the Muse. Apollo gave his son a lyre and taught him how to play; Orpheus did to such perfection that even Apollo was surprised. It is said that nothing could resist to his music and melody, neither friends nor enemies or beasts. Even trees and rocks were entranced with his music.

Orpheus fell in love with Eurydice a woman of unique beauty; they got married and lived happily for many years. Hymen was called to bless the marriage and he predicted that their perfection was not meant to last for years.

At some time, soon after his omen, Eurydice was wandering in the forest with the Nymphs, when Aristaeus, a shepherd saw her and was beguiled by her beauty. He started chasing her and making advances on her. Eurydice got scared and tried to escape, but she was bitten by a snake and died.

Orpheus sang his grief with his lyre and managed to move everything living or not on the world; both humans and Gods were deeply touched by his sorrow and grief.

Orpheus to the Hades

Apollo then advised his son to descend to the Hades and see his wife. Any other mortal would have died, but Orpheus protected by the Gods, went to the Hades and arrived at the infamous Stygian realm, passing by ghosts and souls of people unknown. He also managed to charm Cerberus, the known monster with the three heads. Orpheus presented himself in front of the God of the Underworld Hades (Pluto) and his wife Persephone.

Orpheus started playing for them and even the cold heart of Hades started melting, due to the melodies coming from Orpheus lyre. Hades told Orpheus that he could take Eurydice with him but under one condition; Eurydice would follow him while walking out to the light from the caves of the Underworld, but he should not look at her before coming out to the light because he would lose her forever. If Orpheus was patient enough he would have Eurydice as a normal woman again on his side.

Orpheus and Eurydice ascending to life 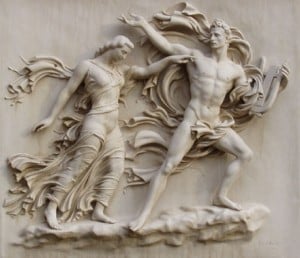 Orpheus was delighted; he thanked the Gods and left to ascend to the world. He was trying to hear Eurydice’s steps, but he could not hear anything and he started believing that the Gods had fooled him. Of course Eurydice was behind him, but as a shadow, waiting to come to light to become a full woman again. Only a few feet away from the exit, Orpheus lost his faith and turned to see; he was Eurydice behind him, but her shadow was whisked back among the dead. Eurydice was gone forever.

Orpheus tried to return to the Underworld but a man cannot enter the Hades twice, not alive anyway. Here, there are two different versions of the same myth. According to the first version, Orpheus started playing a mourning song with his lyre, calling for death so that he can be united with Eurydice forever. Beasts tore him apart, or maybe the Maenads, in a frenzy mood. According to another version, Zeus decided to strike him with a lightning because Orpheus would reveal the secrets of the Underworld to the humans.

In any case, Orpheus died but the Muses decided to save his head and keep it among the living people to sing for ever, enchanting everyone with the lovely melodies and tones.

7 thoughts on “Orpheus and Eurydice”