The myth of Europe is a fascinating myth of the Greek Mythology that inspired writers, historians, painters and politicians who gave her name to coins, a continent and created several several pieces of art depicting the love making of Zeus and Europe.

Europe was a beautiful princess, who was abducted by Zeus, brought to Crete, and born three sons – Minos, Rhadamanthys, and Sarpedon, who all became judges on the Underworld. Zeus was the father of all the children of Europe but he asked her to marry Asterion, the king of stars. And she did.

The myth of Europe and its variations

Starting off as a mortal woman in Greek Mythology, Europe became immortal after her name was given to the continent. One legend says that Europe had a dream one night in which two women – actually two continents –were arguing. One of them, Asia, believed that Europe belonged to Asia, since she was born there. The other one with no name -Europe –  said Zeus would give the name to her.

The myth of Europe and Zeus has some slightly different variations about the details of how they met and how the bull seduced her. What all of them have in common is that Zeus one day saw Europe among other young women and was so struck by her beauty and her charms that he, known as the God with many love affairs, decided to take her for himself.

His plan was to turn himself into a white bull and swim to the shore of Asia where she lived. The bull was so pretty and gentle that all women at the shore fell for him. But he bent in front of Europe offering her his back to ride. She mounted on his back and the bull took her from Phoenicia, across the sea, to Crete, to Dikteon Andron, the cave where he was born. That is where he showed his real identity to Europe. 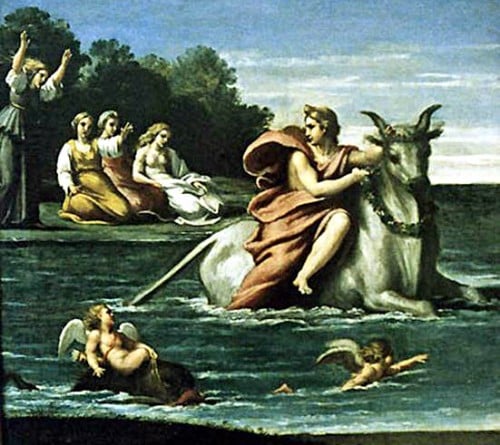 There is though, a different version of the myth, according to which Zeus brought Europe to Gortyn in Crete and they mated below a platanos (plane tree), which became since then an evergreen tree.

Europe was a daughter of the Phoenician King of Tyre Agenor, and Queen Telephassa. Europe has two brothers – Cadmus, the one who is believed to bring the alphabet to Greece, and Cilix, whose name was given to Cilicia in Minor Asia. When Europe disappeared on the back of the bull Agenor sent his sons to look for their sister ordering them not to come back without her. Brothers went in different directions, stopped looking for her after awhile, and Europe stayed with Zeus.

Zeus’s love for Europe was so big that he gave her the finest presents: Talos, Laelaps, and a magic javelin. Talos was a man of bronze who was the guard of Crete; Laelaps was a hunting dog, and the javelin was magic since it could always hit the focused target. And that bull, that seduced Europe, was eventually turned into the constellation of Taurus. But Zeus’s interest passed, and he arranged Europe’s marriage to Asterion.

The mythical love story of Europe and Zeus has been a theme of many artistic presentation and achievements. Nowadays, the Greek coin of 2 Euros, has an image of Europe’s abduction from Zeus as a bull.