The myth of Pegasus and Bellerophontes has a particular place in Greek Mythology because it speaks about betrayal and loyalty, dreams and expectations, coincidences and chances, and all that through a story that has more juicy parts beforehand and aftermath than in the actual story of those two.

Pegasus was a winged horse born from the blood of beheaded Medusa, and given by the goddess Athena to the Muses of the Mount Helicon to being taken care of.

Bellerophontes or Bellerophon was a great equestrian, a young man from Corinth, whose biggest dream was to have Pegasus for himself. Although Bellerophontes is supposed to be the son of King Glaucus of Corinth, there were rumors that his father was actually Poseidon, the God of the Sea. In the latter case, that would mean that Pegasus and Bellerophontes were brothers via their father, but that was never the interesting part of the myth about the two of them.

While Pegasus was enjoying his calm days with the Muses, Bellerophontes was dreaming about adventures. Looking for them he met Proteus, the early sea-god, and son-in-law of the King of Lycia. Believing in their friendship, Bellerophontes didn’t recognize Proteus’s jealousy, let alone his friend’s plan to kill him.

Aware of Bellerophonte’s adventurous nature, Proteus sent him with a sealed letter to his in-laws. When he arrived in Lycia, Bellerophontes found out that every night Chimera, the monster with the head of a lion and the tail of a dragon, terrorized the village taking children, women and livestock away and leaving their bones alongside the mountain.

Bellerophontes didn’t know that his own death was requested in the letter he brought. Proteus asked his in-laws to get rid of the messenger. Instead of killing him on spot, the king asked Bellerophontes to kill the Chimera, knowing that he would never come back alive.

Bellerophontes was excited and went for advice to Polyidus or Polyeidos, the wisest man in Lycia. Polyeidos told him he would need the winged horse Pegasus.

There are many versions about how Bellerophontes managed to get Pegasus: 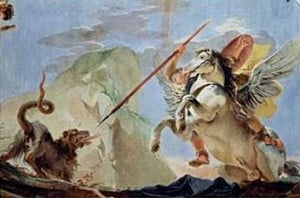 The following morning, Bellerophontes hid in the bushes waiting for Pegasus to come. Wise enough, he waited longer for Pegasus to kneel so he can sit on his back. When that finally happened, Bellerophontes slipped the bridle given by Athena, onto Pegasus’s head. The flying horse flew into the air trying to shake the intruder off from his back. When he realized that he had an experienced and skillful man on his back, Pegasus gave up and surrendered.

A different version of the myth says that Pegasus voluntarily kneeled in front of Bellerophontes when he saw Athena’s bridle. In any case, Bellerophontes became the hero killing the fire-breathing Chimera from the back of Pegasus, who not only carried the hero but actively participated in the battle himself.

Bellerophontes was given the King’s daughter for his wife and he succeeded the king after his death. But Belerophonte’s restless nature called for new adventures and he rode Pegasus to fly to the Mount Olympus to visit the gods.

Was it greed or simply lack of awareness, but it was the wrong idea of Bellerophontes. Furious because Bellerophontes even dared to think to come to the heights of the Olympus, Zeus sent a gadfly towards the flying guest. Pegasus was stung and disturbed and Bellerophontes lost his balance and fell on the ground.

Athena, as it’s said, spared his life softening the ground for the fall, but until the end of his life, the crippled and lonely Bellerophontes was hiking around looking for his precious Pegasus. Of course, he never found him. Pegasus continued to live on Mt Olympus, where Zeus welcomed him and kept him as his favorite and most important steed. The myth says that Pegasus was loyal to Zeus until his last day.