The myth of Tantalus is about the punishment of Tantalus by the Gods and it is associated with many other myths in Greek mythology referring to heroes, that were punished by the Gods for their behavior or crimes.

According to the myth, Tantalus was one of the residents of the deepest portion of the Underworld known as Tartarus, where most people were some sort of evildoers.

Tantalus was also punished with the so called eternal punishment, like  Sisyphus, where he was condemned to stand in a lake with fruits, but without being able to satisfy his thirst or his hunger.

The tragic fate of the children of Tantalus and Dione 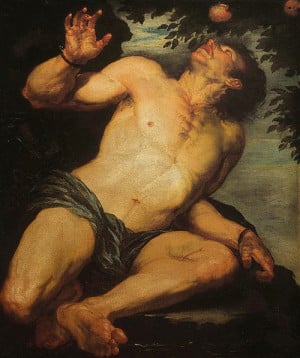 Tantalus’ and Dione’s  3 children were marked by a tragic fate:

Niobe, was the first child (daughter) of Tantalus. She married the king of Thebes called Amphion, but made the mistake to boast that she had more (in number) and more beautiful children than Leto, the mother of Apollo and Artemis.

Leto  was insulted and therefore called her 2 children the deities to kill all 12 of Niobe’s children. Niobe would suffer from eternal weeping and that would stop only when Sipylus would turn her into stone.

Broteas, was one of the two sons of Tantalus. Broteas insulted Artemis refusing to honor her. The goddess decided to punish him and drove him mad.

Broteas was fool enough to think that he was invulnerable so he threw himself into the fire thinking that the flames would not burn him, so he died.

Pelops, did not do anything to offend the Gods himself, but he played a very important role in the story of his father. We know already about Pelops from his story of the house of the Atreids.

The crimes of Tantalus against the Gods

Tantalus fate was to become one of the  favorites and most intimates of Zeus. It seems that the rest of Gods were favorable towards Tantalus too, since he was frequently invited to the Olympus to dine with them.

However, the hero Tantalus did not prove worthy of all these favors and honors, since he committed several crimes and injustices against the Gods.

One of Tantalus’ crimes was that he stole ambrosia from the Mt Olympus, although he was invited as a guest to one of the rich dinners of the gods. Later on, he took ambrosia and nectar and took them to his friends trying to impress them.

Tantalus also revealed some very important secrets that Zeus himself had confined in him, betraying the hospitality and trust of the Gods. He was present in some conversations between the Gods and overheard some divine secrets, which he told to the mortals.

Finally, Tantalus stole the favorite pet of Zeus, his golden dog. It is not absolutely certain that Tantalus himself did it, but he hid the dog for a known thief, Pandareus and then he refused to return it.

Tantalus and the dinner to Gods

Although all the above mentioned crimes were pretty insulting to the Gods, showing that Tantalus was on the wrong track, the Gods did not punish him at first, thinking that he would understand from his mistakes.

Unfortunately, Tantalus did not correct himself but committed even worse crimes against them.

Tantalus invited all the Gods of the Olympus to a feast and dinner. But either because he wanted to test their genius or because he did not have enough food, he decided to do one of the most disgusting acts in Greek mythology.

He killed his son Pelops, cooked him roasting the pieces of his body and served him to the Gods. However, the Gods understood what was going on and refused to eat.

The only one who decided to eat the food provided by Tantalus was Demeter, who ate the shoulder of Pelops. According to the myth, Zeus decided to restore Pelops’ life, and Demeter gave him an arm made of ivory, to replace the shoulder she had eaten during the dinner.

This act could not go unpunished and the Gods punished Tantalus: Zeus killed him crushing him on a mountain and destroyed everything he had created, including his kingdom. But that was not the end…

Zeus brought Tantalus to the Tartarus and put him into a lake with a fruit tree above him. Tantalus was doomed to suffer from hunger and thirst eternally, since he could not reach the fruit or the water. Although he was close to the fruits and the water, whenever he tried to take a piece of fruit or drink a little water, the tree and the water would move away from him, so that he could not reach them.

The punishment of Tantalus was actually the eternal frustration that he could not satisfy his needs.

The Myth of Tantalus in modern life

Since the Greek mythology gave us the myth of Tantalus, this name became the origin of the English verb “to tantalize”. The underlying idea behind the verb and its products  is that when someone is tantalized, that person undergoes the same experiences as the hero of the myth: something needed and desirable is out of reach always, or too hard to get. The verb “tantalize” means to arouse someone’s expectations teasing him, since they are eternally disappointed.

Therefore,  analogically, Tantalus, is the name we give to a specific type of decanter of drinks. In this case the stoppers of the bottle are firmly clamped down with the use of a locked metal bar, in order to prevent servants or other people from stealing the drink and liquor of the house. The locks and the decanters are clearly noticeable and visible.

1 thought on “The myth of Tantalus”