The myth of Aphrodite and Adonis is one of the most popular Greek myths, since it is directly associated with love and Eros. Not even Gods and deities could escape the powerful arrows of God Eros and fell in love with mortals with catastrophic results.

Aphrodite and Adonis is a classic myth about lust and rejection, enhanced with several spicy details about the Goddess of Love and Lust and the beautiful mortal Adonis.

Adonis is the personification of masculine beauty to which he owed his fate according to the Greek myths. There are actually two known myths about Adonis and Aphrodite. The first myth refers to Adonis’ early years, and the second to his death and Aphrodite’s role in it.

Adonis and Aphrodite: A Myth about Beauty and Love 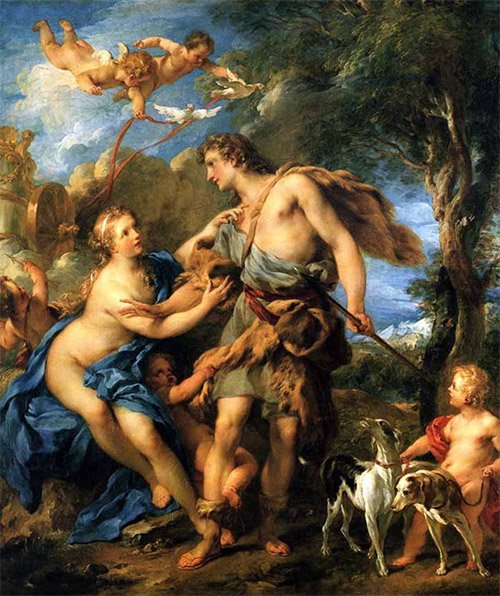 The first myth of Aphrodite and Adonis involves the man’s parents and is a story about beauty, love and jealousy. Adonis’ mother was the beautiful Myrrha or Smyrna and his father, King Cinyrus of Cyprus, who was actually the father of Myrrha.

This strange parentage of Adonis came about because Goddess Aphrodite was jealous of Myrrha’s beauty and caused the girl to unite with her own father.

When Cinyrus found out that he had been tricked, he chased Myrrha with a sword, intending to kill both her and her unborn child. Aphrodite, repenting of her deed, quickly turned the girl into a myrrh tree.

The dispute of Persephone and Aphrodite over Adonis

Aphrodite hid the newborn child, Adonis, in a chest, which she gave in charge to Persephone, queen of the nether world. But when Persephone opened the chest  she was beheld by beauty of the baby, so she refused to give him back to Aphrodite, although the goddess of love went down herself to the Underworld to ransom the baby Adonis from the power of the dead.

The dispute between the two Goddesses of love and death was settled by Zeus, who decreed that Adonis should abide with Persephone in the underworld for one part of the year, and with Aphrodite in the upper world for another part. When he stayed in the underworld, it was winter. When he returned, the Earth blossomed into spring and summer.

In this form of the myth, the contest between Aphrodite and Persephone for the possession of Adonis clearly reflects the struggle between love and death; this is a common subject in Greek Mythology, since we see it in the myth of Persephone and Hades.

The decision of Zeus that Adonis is to spend one part of the year under ground and another part above ground is merely a Greek myth about the notion of the annual disappearance and reappearance, which refers to spring and winter.

A different version of the myth of Aphrodite and Adonis

In some versions of the myth of Aphrodite and Adonis,  when Ares, the God of War and Aphrodite’s lover,  hears that Aphrodite loves the youth Adonis, got really jealous and decided to take revenge.

Aphrodite was chasing Adonis to mate with him, but Adonis was more interested in hunting. Aphrodite begged Adonis to give up the dangerous sports he enjoyed because she could not bear to lose him, knowing that the young man would have a terrible end. Adonis ignored her advice and was killed while hunting by a wild boar, that was actually God Ares.

When Adonis died, Aphrodite heard his cries and hastened to his side in her swan-drawn chariot. She cursed the Fates and Ares that had ordained his death. With Adonis still in her arms, Aphrodite turned the blood drops that fell from his wounds onto the soil into windflowers (the short-lived anemone) as a memorial to their love.

Anemones sprung from the blood of Adonis and his spirit returned to the underworld. In response to the tearful goddess, Zeus determined that Adonis should stay just for the half of the year in the Underworld.

The death and resurrection of Adonis in Greek Mythology

According to scholars, the death and resurrection of Adonis represents the decay and revival of the plant year. He was worshiped as a corn god, a god of grain crops, which were very  more important to the ancient inhabitants of Greece and other Mediterranean lands.

The myth of Aphrodite and Adonis in Art

The myth of Aphrodite and Adonis appears in Book Ten of Ovid’s Metamorphoses. In this version, Orpheus tells us the story when he laments to the trees and wild animals after the loss of Eurydice.

Aphrodite (Venus for the Romans) is desperately attracted to the young Adonis, who, being more interested in the art of hunting, does not show any form of affection. She tries in vain to persuade Adonis to love her.

However, Adonis prefers to go hunting, and he dies after being badly injured by a boar. But Venus does not resign herself to the loss of her beloved and decides to metamorphose him into a beautiful flower growing from his blood, and which still remains a symbol of her frustrated love.

Shakespeare does not follow Ovid’s version of Venus and Adonis, as it is told in Book Ten from the Metamorphoses. However, he shapes his poem out of diverse mythological references, referring to the myth of Aphrodite and Adonis as a symbol of love and loss.

6 thoughts on “The Myth of Aphrodite and Adonis”