The myth of Perseus and Medusa is one of the best thriller-like tales in Greek Mythology.

With a promising plot that gets more complicated as the story progresses, this myth has a typical Hollywood-like scenario with the main character not being born yet at the moment when his destiny was determined.

Here, we will present just a short version of the myth of Perseus and Medusa – until the moment when Perseus beheaded Medusa. 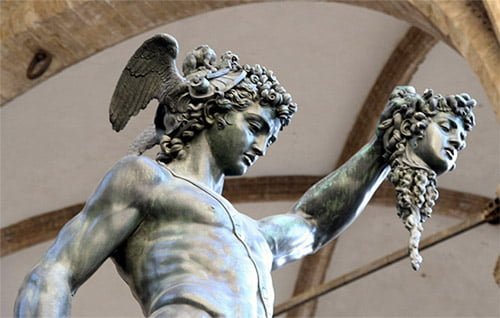 Perseus and the Oracle

Acrisius, the king of Argos, was told by the oracle of Delphi that his own grandson would kill him one day. This grandson would be the child of his daughter Danae. Scared of the upcoming future and his destiny, King Acrisius decided to deprive his daughter of any possible intercourse, mating and child bearing, so he built a room beneath the earth and imprisoned Danae there.

However, as the legend says, Zeus came to her in the form of golden rain, pierced through the walls of chamber, and Danae’s body. Hence, Perseus was born. Hearing the news but not believing that Zeus was the father of the newborn, Acrisius let his daughter and grandchild out to the open sea on an ark. They eventually came to the shores of Serifos island, where they were saved and adopted by a local couple, the man being the brother of the king of the island, Polydectes.

When Perseus grew up to a handsome and strong young man, one more time he found himself in the way of one king, this time King Polydectes, who wanted Danae to become his wife. Knowing that he wouldn’t have the woman for himself as long as Perseus was there to protect her, the king made a plan to send Perseus not only far away but also to a dangerous mission. Polydectes told Perseus to bring him the head of the gorgon Medusa.

Medusa was one of three sisters, the gorgons, but she was the only mortal one. Some versions say all three were born as monsters, but the predominant myths had them as gorgeous maidens. Medusa was so beautiful that Poseidon was crazy about her, but she didn’t care about him; Poseidon turned her and her sisters into monsters with live snakes covering their heads. Medusa kept her beautiful face but everything else was so monstrous. And whoever dared to look into her face ended up being turned into stone.

Perseus thus had a hard task. He asked Athena and Hermes for help and two of them, together with the nymphs, provided winged sandals to fly him to the end of the world where gorgons lived, a cap that made him invisible, a sword and a mirrored shield. The latter was the most important tool Perseus had, since it allowed him to see a reflection of Medusa’s face and to avoid being turned into stone.

When he cut Medusa’s head off, from the drops of her blood suddenly appeared two offspring: Pegasus, a winged horse, and Chrysaor, a giant or a winged boar. It’s believed that those two were Medusa’s children with Poseidon.

In any case, once he accomplished his task Perseus flew back and escaped Medusa’s sisters who tried to reach him. Later, Perseus used Medusa’s head as a weapon in many occasions until he gave the head to Athena to place it on her shield.

The myth of Perseus and Medusa was one the most powerful inspiration for many artists in the ancient times, but it hasn’t lost its artistic significance to the present day either. Paintings and sculptures of the moment of beheading or Medusa’s portrait itself are famous all over the world. One of the most known art work is the Medusa shield by Caravaggio, painted at the end of the 16th century. It is exposed in the Uffizi museum in Florence. Close by the museum, in the main plaza of Firenze (Florence) there is a sculpture of Perseus.

27 thoughts on “The myth of Perseus and Medusa”