The list of Seven Wonders of the Ancient World belongs to a category of texts and Greek myths written by the Ancient Greek historians and travelers.

Myth and reality about the Seven Wonders of the Ancient World

Although not completely mythological, the Seven Wonders of the Ancient World were associated with several Greek myths and heroes of the Greek Mythology and became the ground for numerous more legends in the years to come.

The Seven Wonders of the Ancient World were splendid buildings worthy of prevalence.  According to the historians, the original list of the 7 wonders, including only Greek buildings was lost. The list of the wonders as we know it today was created approximately in the 3rd century BC, expressing the novel idea that both Greek and “barbarians” – meaning not Greeks – were able to produce fine pieces and works of art.

How was the list of the Seven Wonders of the Ancient World created?

After the conquests of Alexander the Great, many travelers from the Greek mainland got access to the ancient civilizations of the Persians, the Babylonians and the  Egyptians. These travelers were smitten by the beauty and the marvels of the lands they visited and decided to list what they were seeing, in order to remember the worthiest easier. In Greek, the word used for these marvels of the ancient world was “theamata” which means “the must- sees”.

The most known list, on which our knowledge for the seven wonders of the World is based, is the list of Antipater of Sidon and an observer identified as Philon of Byzantium. However, we are still not sure that some of these wonders were real, and not part of a Greek Myth or foreign legend.

What are the Seven Wonders of the Ancient World?

The seven wonders of the Ancient World are:

The Hanging Gardens of Babylon

Diodorus Siculus described the hanging gardens of Babylon as  multi-leveled gardens reaching 22 m high, with an amazing machinery for circulating water. The gardens were built on the bank of the Euphrates River by Nebuchadnezzar II for his wife Amytis of Media. The gardens were destroyed in the 1st century BC by a massive earthquake. It is not completely certain that these gardens existed, or was a product of the vivid imagination of the ancient Greeks who liked creating myths, but it seems that there are sparkles of reality there.

Phidias’ Statue of Zeus in Olympia

The statue of Zeus was built in 466 BC. It occupied the entire width of the aisle of the temple in Olympia that was built to house it, and was 12m (40 feet) tall. The statue was made of gold and ivory.. In the fourth century AD, the Roman emperor Constantine the Great ordered it to be dismantled, and had it transported to Constantinople, the new capital of the Roman empire. The statue was destroyed in a fire.

The Lighthouse of Alexandria

The Colossus of Rhodes

The colossus of Rhodes was a gigantic statue of Helios, the Greek Sun God, It was 35 m (110 ft) tall. The statue was erected at the entrance of the port of Rhodes. According to the legend, the statue stood with one foot on either side of the harbor, although this is not confirmed. The statue was destroyed in 226 BC at the Rhodes Earthquake, only 56 years after its construction.

The Pyramids of Cheops in Egypt 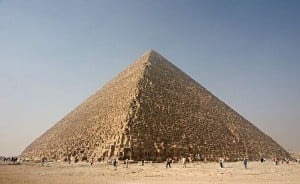 The Mausoleum of Halicarnassus 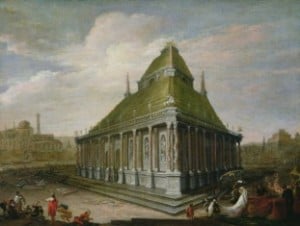 The Mausoleum of Halicarnassus stood approximately 45m (135 feet) tall with each one of the four sides adorned with sculptural reliefs. It was built in 351 BC as a tomb for Mausolus, a Persian Satrap. It is said that the wealth of the Mausoleum was unbelievably huge. It was destroyed  in AD 1494, since it was disassembled by the Crusaders who entered  Halicarnassus.

The temple of Artemis in Ephesus

The temple of Artemis was built in the Greek City of Ephesus – in Turkey today. It was dedicated to the Goddess Artemis (Diana) and took 120 years to build. Herostratus, a young man in Ephesus, decided to burn it down, to achieve long lasting fame. Alexander the Great rebuilt it, but it was again destroyed by the Goths. Once more it was rebuilt in early 2nd century AD, but it was destroyed once and for all by St John Chrysostom in 401AD, because it was a pagan temple.

The Seven Wonders of the Modern World

3 thoughts on “The Seven Wonders of the Ancient World”