Jason, the hero of one of the most famous Greek myths  often known as “Jason and the Golden Fleece” or “Jason and the Argonauts”, was the son of Aeson king of Iolcus, in Thessaly Greece, and of Queen Alcimede.

The beginning of the myth of Jason

When Pelias, the half-brother of Aeson, deposed Aeson and claimed the throne of Iolcus threatening to kill anyone who disputed his claim, Jason, the heir to the throne, was smuggled away from the kingdom and put into the care of Chiron the gentle Centaur.

After many years, Jason made his way back to Iolcus to regain his kingdom. On his way he helped an old woman by carrying her across a river. He lost one of his sandals in the stream but earned the gratitude of the woman, who was the goddess Hera in disguise. Since then, Hera would always be a friend and an ally of Jason.

King Pelias had been warned by an Oracle to beware of a man wearing one sandal. When Jason appeared with one bare foot, Pelias sent him on an expedition to find the Golden Fleece, knowing it was unlikely that Jason would ever return.

Jason and The Argonauts – The Myth

Jason had won the favor of the goddesses Hera and Athena. With their help Jason built the fabled ship Argo, which had 50 oars. He recruited 50 remarkable people called the Argonauts. They included one woman, Atalanta,  and Hercules, the strongest man who lived ever. Orpheus, the poet from Thrace, who could sing more sweetly than the Sirens,  as well as Castor and Polydeukis, the brothers of Helen of Troy, were also in the team of the Argonauts. 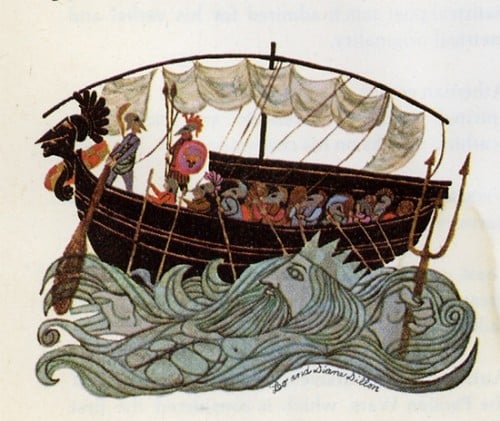 Jason and the Argonauts set sail for the Black Sea where the legend said the Golden Fleece was hidden. After many adventures, the Argonauts reached the kingdom ruled by Aetes. The king, whose help the Argonauts needed, imposed seemingly impossible tasks upon Jason. One was to harness the fire breathing bulls with brazen feet and plow a field. Then he was to sow the plowed field with dragons’ teeth, from which would spring fully armed warriors.

Fortunately for Jason, Medea, daughter of Aetes, had fallen in love with him. Medea used her powers as a sorceress to help him. Jason mastered the bulls, and when the armed men sprang from the dragons’ teeth, Jason did what Kadmus had done before him: He threw a stone into the midst of the warriors, who accused each other of throwing the stone. They fought amongst themselves until all were dead.

Medea then led Jason to the place where the Golden Fleece hung, guarded by a terrible dragon. Using a magic potion, Medea put the dragon to sleep, allowing Jason to secure the precious trophy. Jason and the Argonauts put to sea, accompanied by Medea, and pursued by King Aetes.

Medea slew her brother, Apsirtus, who had accompanied them. She cut his body into pieces and flung them into the sea and onto the surrounding land, knowing that Aetes would gather up the dismembered pieces of his son’s body to give them a ceremonial burial. Thus Jason and the Argonauts escaped with the Golden Fleece, and returned it to Iolcus.

1 thought on “Jason and The Argonauts”

Scroll back to top
We use cookies to ensure that we give you the best experience on our website. If you continue to use this site we will assume that you are happy with it. Continue Read More
Privacy & Cookies Policy
Necessary Always Enabled