The myth of Pygmalion and Galatea is probably one of the most known stories in Greek Mythology.

The myth of Pygmalion and Galatea is also one of the most influential and inspiring ancient Greek myths, and became the main theme for theatrical plays, movies and artistic paintings.

Pygmalion was a talented Greek sculptor from Cyprus. After becoming disgusted by some local prostitutes, he lost all interest in women and avoided their company completely.

Pygmalion saw women as flawed creatures and vowed never to waste any moment of his life with them. He dedicated himself to his work and soon created Galatea, a beautiful stature of a woman out of ivory.

Ironically, the masterpiece of his life was this statue of a woman. Perhaps he sought to correct in marble the flaws he saw in women of flesh and blood.

Whatever the case, Pygmalion worked so long and with such inspiration on the statue of Galatea, that it became more beautiful than any woman that had ever lived or been carved in stone.

As he finished the statue’s features, they became exquisitely lovely, and he found himself applying the strokes of hammer and chisel with increasing affection. When his chisel finally stopped ringing, there stood before him a woman of such perfection that Pygmalion, who had professed his disdain of all females, fell deeply in love.

He would bring it gifts, caress it, kiss it and talk to it every day. He brought it gifts he thought women would enjoy, such as pretty seashells, beads, songbirds, baubles and flowers.

He would dress the statue in fine clothing, and put rings on her fingers, necklaces around her neck and even earrings. However, what irony that he who had scorned women should fall in love with a woman who could never love him in return!

Such a passion could not go unnoticed by the goddess of love, Aphrodite. She took pity on the young man and, when Pygmalion went to her temple to sacrifice a bull, Aphrodite gave him a sign. As the offering burned on the temple, the flames shot up one, two, three times.

Pygmalion went home, wondering what to make of the manifestation he had seen. When he entered his studio, however, and saw the statue, all other thoughts were banished from his mind. He ran to his statue and embraced it.

Did she seem warm to his touch, or was it just residual heat form the sunset that had warmed the stone? He kissed her.

Did the statue’s lips seem soft? He stood back and regarded her.

Did there appear the glow of life from within the marble form? Was he imagining it?

No. Aphrodite had given life to the statue, whose name was Galatea.

Pygmalion’s mind oscillated between doubt and joy. Fearing he may be mistaken, again and again with a lover’s ardor he touches the object of his hopes.

It was indeed alive! The veins when pressed yielded to the finger and again resumed their roundness.

Slowly it dawned on Pygmalion that the animation of his sculpture was the result of his prayer to Goddess Aphrodite who knew his desire. At last, the votary of Aphrodite found words to thank the goddess. Pygmalion humbled himself at the Goddess’ feet. 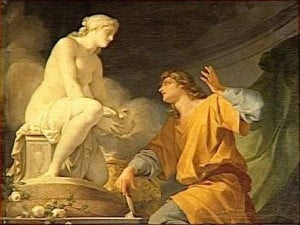 Soon Pygmalion and Galatea were wed, and Pygmalion never forgot to thank Aphrodite for the gift she had given him.

Aphrodite blessed the nuptials she had formed, and this union between Pygmalion and Galatea produced a son named Paphos, from whom the city of Paphos in Cyprus (this city was sacred to Aphrodite), received its name.

Pygmalion and Galatea brought gifts to her temple throughout their life and Aphrodite blessed them with happiness and love in return.

The unusual love that blossomed between Pygmalion and Galatea enthralls all. Falling in love with one’s creation and then getting the desired object as wife- perhaps this was destined for Pygmalion.

Even to this day, countless people and young lovers are mesmerized by this exceptional love that existed between two persons at a time when civilization was in its infancy.

The Myth of Pygmalion and Galatea in Arts

The basic myth of Pygmalion and Galatea   has been widely transmitted and re-presented in the arts through the centuries. A few centuries later Goethe calls the statue Elise, based upon the variants in the story of Dido/Elissa.

George Bernard Shaw wrote a play titled “Pygmalion”. In Shaw’s play, the girl is brought to life by two men in speech — the goal for their masterpiece is for her to marry and become a duchess. It has an interesting spin on the original story and has a subtle hint of feminism.

1 thought on “The Myth of Pygmalion and Galatea”